The Coptic Language is the fourth and last step of evolution of the Ancient Egyptian language, after Hieroglyphs, Heratic and Demotic. All four are identical and differ only in their system of writing. Coptic, just as Ancient Egyptian, is a Hamito-semitic language, similar to many North African languages and with few similarities to semitic languages, such as Hebrew and Arabic. Its alphabet is derived from the Greek alphabet, with seven extra letters that represent sounds peculiar to the Egyptian language and non-existent in Greek. 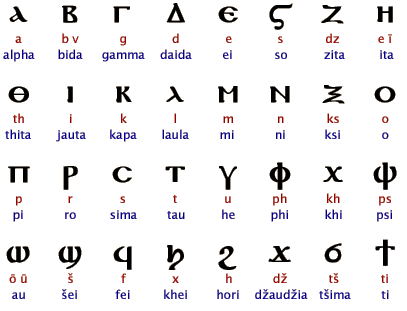 Coptic remained as the language of native Egyptians until the Arab invasion of Egypt in 641 AD. Subsequent to that invasion, Copts were harassed and forced to abandon their native language for Arabic. For a number of centuries Copts remained bilingual but by the thirteenth century, they became mainly Arabic speakers. Coptic remained however the liturgical language of the Coptic Church, and a strong symbol of the resistance of the Copts to the efforts of their arabization. Today, Copts have demands to teach the native language of their country in public schools, but the strong islamic orientation of the Egyptian society prevents any alteration to the heavily pan-Arabic educational systems. Few families in Egypt and many in the diaspora have recently adopted Coptic as their native language, and many Coptic schools and universities have been lately inaugurated in North America, Australia and Europe. Coptic Language is also taught worldwide in many prestigious institutions, but in Egypt it is only confined to Coptic schools and to the American University in Cairo.